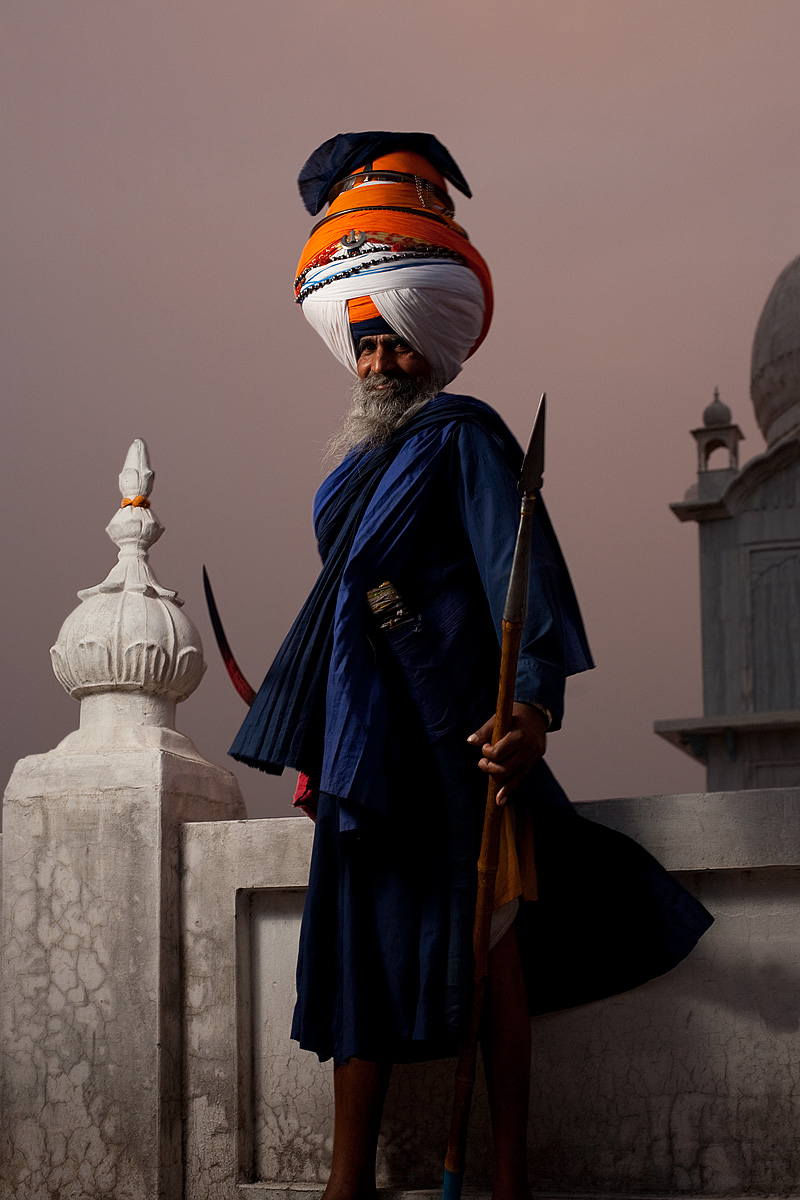 The leader (or head) of the Paonta Sahib Gurdwara appears menacing with weapons drawn. Contrary to the impression left by this image, this man, like most Sikhs I've met, is one of the classiest, kindest, gentlemen in all of India. Despite the fierce stance, you can see the gentle grin poking through his salt and pepper beard.

There's so much to say about the image, the man, and of this completely untouristed destination, Paonta Sahib, but I'll save most of it for a different post of photos shot around the same time. The Sikhs are often known as fierce warriors, but this particular group of Sikhs at Paonta Sahib are renowned for their fighting skills. On this day, I happened to catch a glimpse of their weapons practice on the roof of the Gurdwara, the Sikh religion's temple. I quickly dashed up to find everyone packing their weapons, however, at the rare sight of a foreigner, they kindly unpacked and began practicing again. I pulled out my lighting gear and posed our Gurdwara head just at sunset to capture what is currently one of my most treasured photos. I had so many questions for the man but our communication was limited by an insurmountable language barrier. Why such a large turban? I don't know but from what I gathered, for a man held in such high esteem at the Gurdwara, no size of turban would be big enough.

In terms of the image, a Hollywood wardrobe designer couldn't coordinate a better set of colors. The photo is teeming with complementary color pairs that naturally please our minds. The traditional background structures don't hurt, either.

This photo exemplifies why India is the low-hanging fruit of the photography world. The place is full, not only of style, but overflowing with substance. The people of India don't dress up for the sake of a herd of unloaded package tourists. That is how they are before and after the tour buses arrive and depart. Thousands of years old traditions continue to live on, little effected by other societies' drive to modernize and homogenize.

Strobe camera left diffused with an umbrella. Otherwise, I took so many flash photos that evening, I wouldn't begin to know this particular strobe setting.

I think you could take him...

Great photo. My what a HUGE turban he has. You could probably hide in there.

I'm not sure either why he has such a big turban but I'll try asking. I do know that he is a Nihang Singh which is basically a warrior sikh who has been trained in the Sikh martial art form of Gatka. I think one reason they tie a big turban is because it's a ancient tradition dating back to the Guru (prophets') times and also because it makes it easier to identify a Sikh (especially warrior Sikh) from a far distance. Google "nihang singh" for more info. Hope I helped!

Thanks for the explanation, Singh! If only I spoke Hindi, I would've been able to ask him while I was there!

Hi! I was wondering if you have any pictures of the Sikh Gurdwara's? To be more specific I am searching pictures of Takht Siri Patna Sahib Gurdwara.

Hi! I was wondering if you have any pictures of the Sikh Gurdwara's? To be more specific I am searching pictures of Takht Siri Patna Sahib Gurdwara.